“I am all of you listening”.
Jeanne Moreau, a life of theatre

What would theatre be without actors, without the risks they take every night, without their shamelessness and intelligence? The passion of the audience finds its source in the characters they play and, oddly, from the start of the Festival d’Avignon, in the beauty, striking look, and presence of Jeanne Moreau. I am all of you listening explores the career of a woman who lived the history of the Festival from 1947 to 2011, beside Jean Vilar or Étienne Daho, with the words of Henrich von Kleist or Alfred de Musset, and in roles as different as Nathalie or Célestine. Even in 2014, her image appeared in the Cour d’honneur with the band Têtes Raides. She who gave her dancer’s gait to the figures she filled with incandescence… She who fascinated Marguerite Duras and Jean Genet, and continues even today to embody the ideal of a free and wilful woman…

Jeanne Moreau began her career in 1947  as an actress with Jean Vilar in the Cour d’honneur of the Palais des papes, alongside Gérard Philippe, in 1951. She wasn’t yet 20. An avid reader who trained at the Conservatoire and a pensionnaire of the Comédie-française, she chose in 1951 to follow Vilar and the adventure of the TNP. Up until the end, parallel to her international career in cinema, she came back time and again to the theatre to defend Jean Genet, Heiner Müller, or Peter Handke.

Laure Adler
Laure Adler is a writer, journalist, producer for Radio France, and Marguerite Duras’s biographer. Her passion for theatre and free women informs her production for this commission. 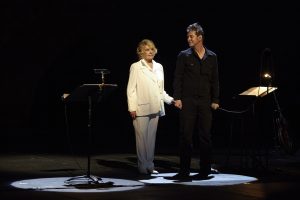